1) What is architectural visualisation?

Architectural visualisation means creating a virtual 3D model, based on the architectural specifications you provide; this virtual scene can then be ‘rendered’ from almost any given angle, using special software. Rendering is the process whereby the 3D model’s lighting, shadow, reflectivity and texture are calculated by the computer to a very precise degree, in order to provide a finish which can often appear indistinguishable from a photograph. Architectural visualisation is useful for creating images of objects and scenes which do not or cannot exist, and can be used in presentations and advertising, for example.

2) How long will my project take?

This depends on several factors:

A particularly fast project might take under a week to complete. We would tend to estimate longer though. If we felt timescales needed revision, we would inform you. You can read some related details below, in the Project Structure / Time section.

3) How much will this cost?

Again, this depends on several factors:

Any of the below items would be most useful.

Rendering is extremely CPU intensive. Basically, the rendering software gives a figure called ‘Sampling Level’ or SL to indicate current image quality, and this is linked with the total time spent rendering.

Every time the sampling level increases by 1, the image clarity increases, but it also increases the time needed to reach the next sampling level. In addition, the visual improvement per level decreases after a certain point, meaning that later sampling levels take a very long time to complete, and provide little visible benefit.

The animation below shows how a render progresses through the sampling levels. SL 18 took almost 13 hours to reach. What’s more, this is a simple scene. Complex scenes take even longer to progress. The image below still has grain, meaning it requires more render time to smooth out.

A 3D floorplan is an image that depicts a given building floor from an above angle, and with the ceiling and certain walls removed or cut away to reveal interior details. 3D floorplans are useful as they convey a mix of architectural scale and realistic texture in 3 dimensions — giving a casual viewer lots of useful information that a formal architectural diagram would not. An example render is posted below. 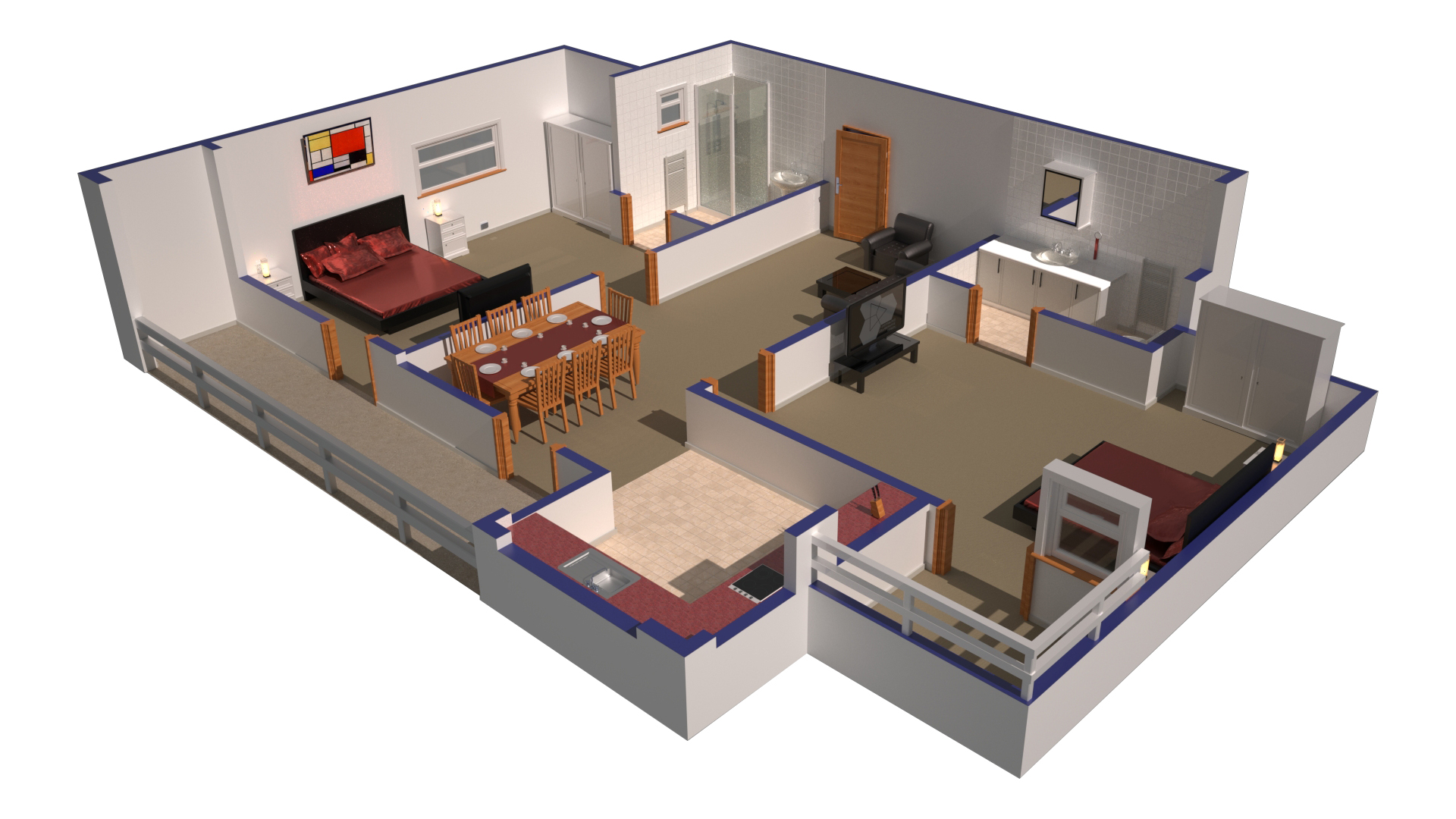 There are several factors that influence the development process.

The first factor is 3D modelling time. This depends on the size and complexity of the requested objects and scenes, any subsequent additions or changes requested, and the quality of any provided blueprints, measurements and / or reference imagery / photographs. In the case of photographs, guesses may have to be made regarding scale, when scale and measurements have not been provided.

After the scene has been finalised in terms of model, texture and lighting, and before we commit to any final render, we must first send you low-quality preview imagery so that you can judge whether the scaling and general appearance is suitable for us to commit time towards a more detailed render image. The preview image is low quality, as it takes time for a high quality image to be rendered. During this phase or cycle, you can request modifications, which we will make, before sending you an updated low quality image. Once you are satisfied by this preview image, we will ask if you are ready for us to commit to the final high quality render(s).