An upcoming patch will see the roll-out of some useful new rd_construct features:

Firstly, after multiple requests, all types of 3D media boards can now be created by users, and can be relocated, resized and deleted, in much the same way as stickers work. All the new boards will come with 3 new ‘handles’ at their corners, which can be operated with the laser tool. The handles allow for deletion, repositioning and rescaling. This allows users to set up a scene and materials as the situation demands. 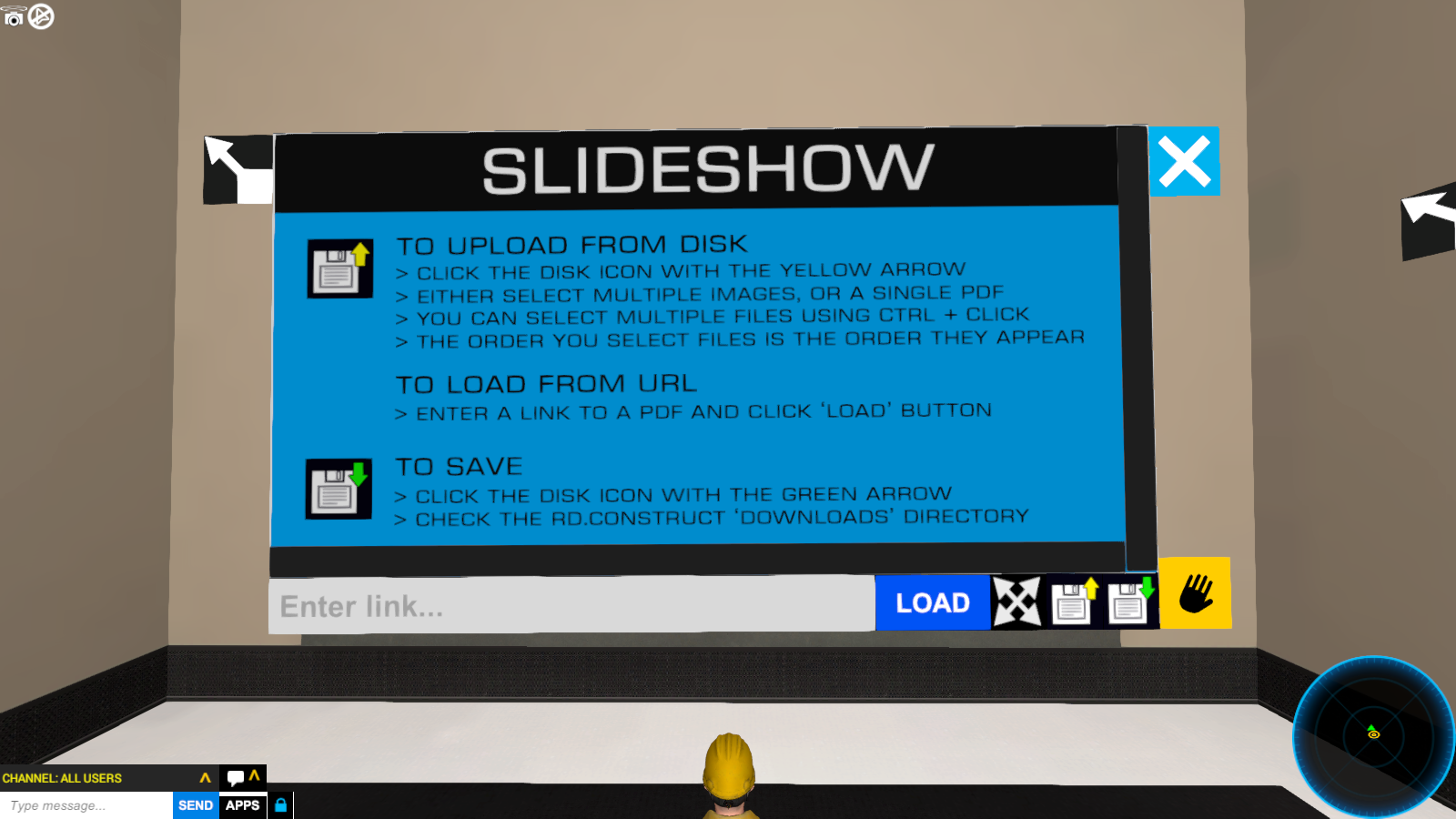 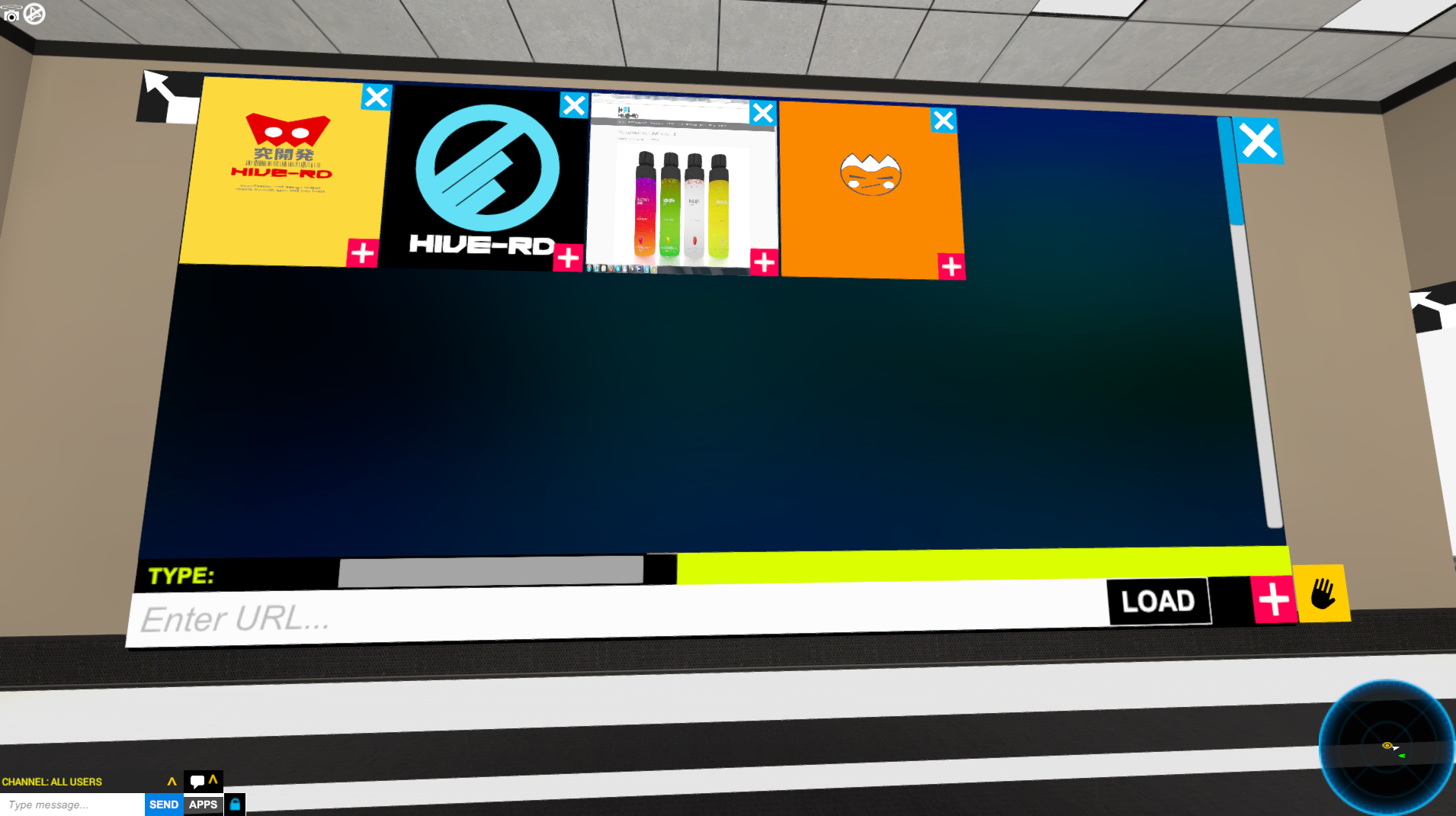 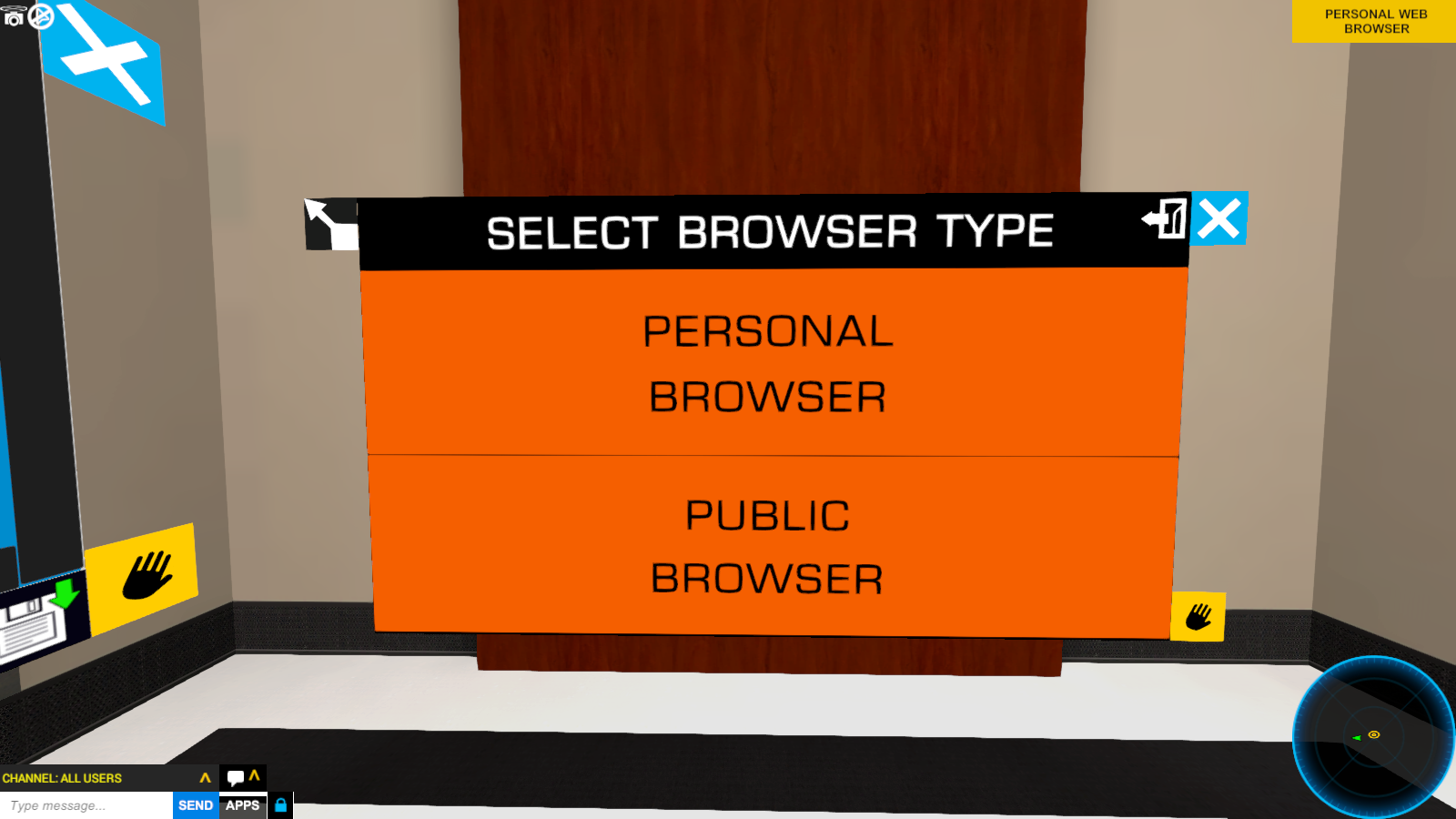 The browser board itself now has an added button that allows you to load up the last publicly-shared link, regardless of when it was sent. There is also an activation radius around the board (a large one) so boards don’t load resources if you aren’t around.

There is also a new flipchart board that has multiple pages that can hold text. These update when a user has finished editing and clicked away from the board. The pages don’t switch for everyone across the network, so users can read at their own speed.

Seating and tables can now be spawned in and relocated as needed. In addition there are a couple of sets of brainstorming aids, including basic shapes and some symbols which can be brought into the world. These can be resized and scaled much like you would in a 3D editing program, but their textures can’t be altered (for now). If a scene is outdoors, or you need more space to display materials, you can also spawn in a display wall item, upon which you can place media share boards, stickers and so on.

The spawnable items will have no solid colliders for now,  so this stops forms of trolling such as blocking up entrances. Avatars aren’t affected by the new 3D items, they can pass straight through them, but media items like stickers and boards will still snap to these new objects, so you can use them together to build a scene. The possibility of solid items (a toggle option most likely) can be added in at a later date if it is important.

The video below shows two people setting up an empty room in about a minute:

These are all the primary shapes that can be created: 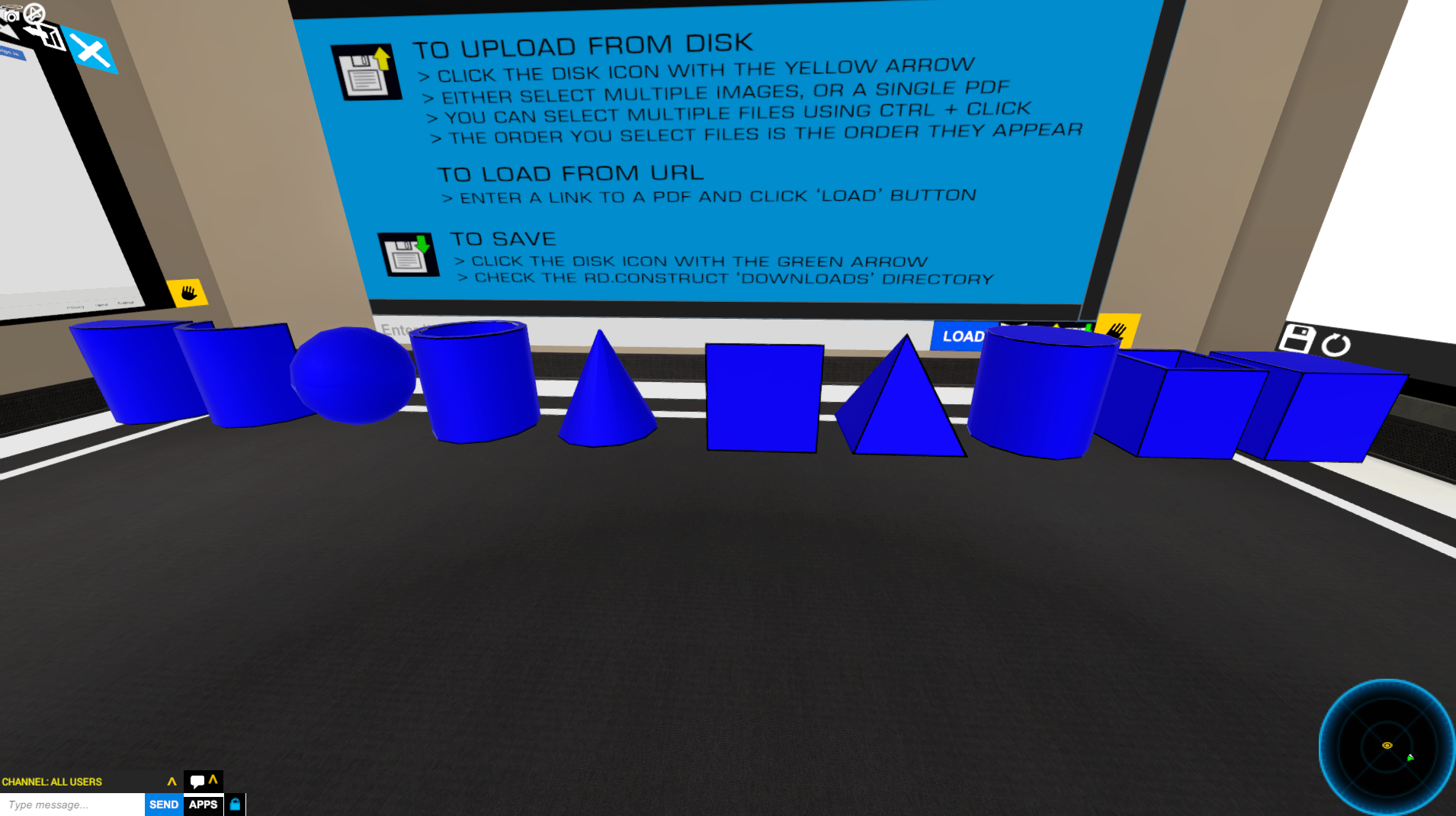 These are all the symbols that can be created: 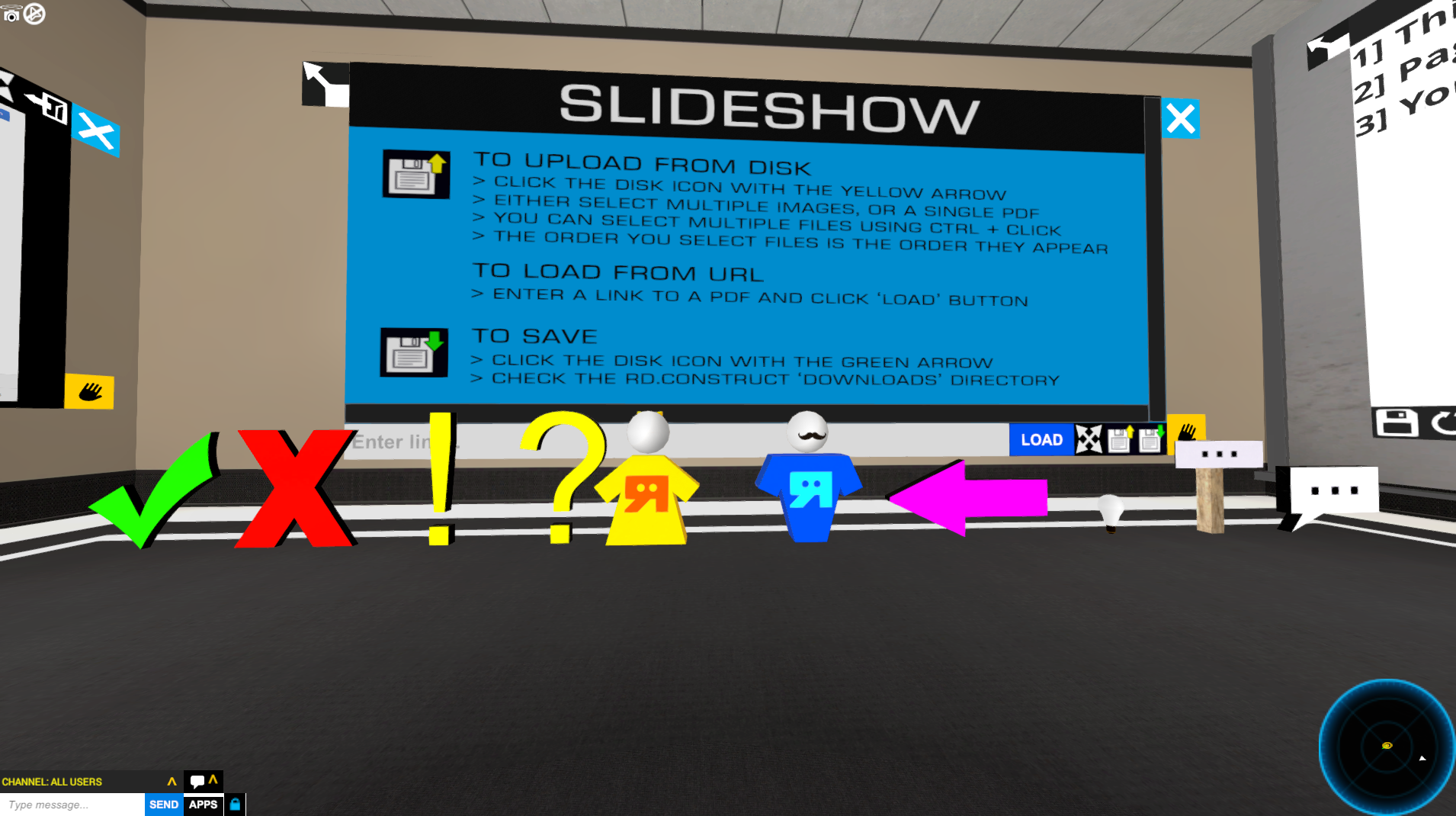 These are all the tables: 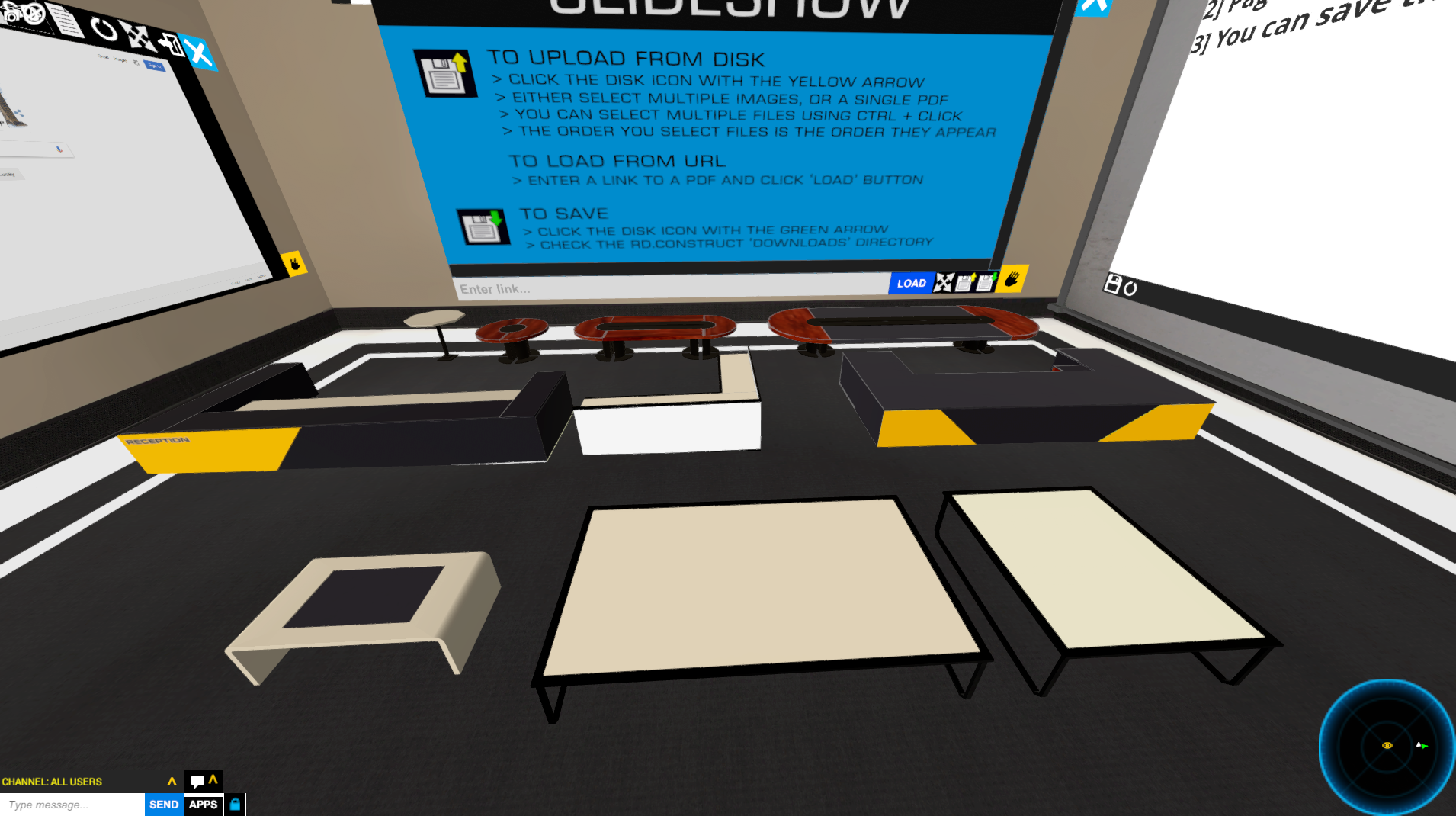 This is all the seating, which works as seating did before: There is also an optional 3D model file import and custom texture import, with file size limitations for the time being [Blender OBJ currently at 100kb and textures currently at 700kb], whilst we ascertain stress levels on the system with large numbers of imported models and textures. We aim to support OBJs from other 3D programs in due course.

The 3D tool options available are as follows (left to right): There are several other bugfixes included as well.